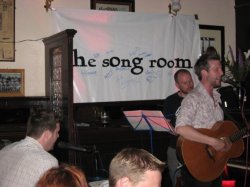 hopefully an appreciative venue can be found soon). For the first time we had Barry playing double bass with us, which is a great addition to the tunes. I brought my beast of a keyboard along and played that, the piano in the pub being unplayably out of tune, unfortunately; I also played cajon and clarinet and added some harmony vocals. 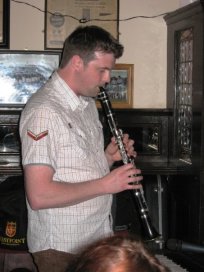 I’m really enjoying this multi-instrumenting at the moment. We played:

‘El Capitane’, ‘I am a man’ and ‘Hey girl’ are all new since the last gig. ‘El Capitane’ reminds me of the Gorillaz a bit with its lazy groove, semi-chanted confrontational lyrics, and “…da, da, da dada dadaaa…” refrain. ‘I am a man’ is a down and dirty bluesy slice of masculine proclamation that is great fun to play: I switched to the electric piano 2 sound on the P200 for the punchy, descending chords of the riff. ‘Hey girl’ is an out-and-out pop song with Hamlet’s characteristically charming lyrical style painting a delightful, carefree picture of a ‘Before Sunrise‘-type relationship. This one we played totally stripped down, Hamlet playing and singing and me singing, humming and clapping.

Hamlet kindly let me do a couple of my own songs and I did ‘Make it home’ on the piano and ‘Face in a frame’ on the guitar. Franzi got some good shots and I got a warm round of applause and some nice compliments. These are my two best songs, I reckon, and it’s been great to play them a good bit over the last few weeks. Next thing is to record them…

I was impressed by the band on after us – Lisa McLaughlin and a couple of talented chaps on guitars and assorted other instruments: flute, melodeon, glockenspiel. They created a variety of really effective accompanying textures for Lisa’s vocals using an impressively portable setup. I envied them somewhat with my gargantuan keyboard.

Wednesday night was Hamlet’s gig in Whelans Upstairs. Barry joined us again and we played a good set – more able to settle in and enjoy the music now we were more familiar with playing the songs together.

The new songs went down well, and the crowd enjoyed the night. Great fun!

Enjoyed a trip to the zoo today with the Transition Year students. There were piglets! 🐖
Mozart piano concerto no. 27 (and then some Shostakovich after the interval...)
Rather nice charity shop find — Wouldn't It Be Good by Nik Kershaw. One of the first pop stars I remember listening to...getting the cassette from the library...
Reading Michael Shellenberger's 'Apocalypse Never', which provides a fascinating counter narrative to climate alarmism.
A big day — the iconic 'U ARE ALIVE (so get your head out of your phone)' mural was on this wall for many years. Excited to see what's next...!
Degas born 19 July 1834
When I was going into my second year at Edinburgh University, moving into a lovely flat on Warrender Park Road with four lovely friends, I found this volume of Beethoven piano sonatas in the secondhand section of James Thin's bookshop (which had a whole sheet music section). A previous owner had inscribed it with their name and the date 1908.
My first wedding in a year 🥰
Trying something new...
Woohoo!
Oh I do like to be beside the seaside 🎶
The one who takes care, in practising of every note, will be at the end a good player. Theobald Boehm. Munich on 4 of March 1872.
Nice example of this wee craytur — well known to graffiti fans around Portobello
Untitled. Artist unknown. (chalk on concrete 2021)
Bit of a random Valentine's Day jaunt with @jennywilson today, powered by GoCar... went to Bushy Park for a walk but it was a bit wet. Ducks and swans were having the craic. Had some bottles to drop off... some shopping to do, too. Wanted to go to a bigger supermarket so drove to the Supervalu at Heuston. Parked in the basement, up the escalator... closed! Very grateful to be able to jump in the car and spin over to Sundrive Road. 🚙✅
Been practising this for a few weeks (along with variations 1-4) and it's getting into pretty good shape.