I’m on a tour bus heading for Glasgow. Last night we played at the Barbican in London, a beautiful hall and the biggest venue we’ve done so far. I was really happy with the show and delighted that my aunt and uncle were there. I stayed with them in London for a week when I was seven. I flew over by myself, an experience that I still vividly remember bits of (not least because they “encouraged” me to keep a scrapbook every night. Something I probably resented at the time but am very glad of now!) — getting to see the cockpit, and being frightened by the ‘woman in the library’ in my Ghostbusters photo story book. Anyway, I was so glad they were there along with their elder daughter, Alice, and another of my cousins, Lauren, who’s studying music in London. Lauren was really chuffed to meet James afterwards 🙂

I was also really pleased that my friend Alan was there (enjoying a rare night out with the father of his toddler daughter’s bestie). Alan and I began our tinnitus together in one of the outhouses at my family home, playing Clapton, Hendrix, U2 — him on guitar and me on drums. Good times 🙂

The Barbican was amazing. Great backstage facilities (including a Steinway grand piano *sigh*) and a concert hall thoroughly deserving of the high regard it’s held in. Definitely a highlight for me so far. James talked a little bit about the first time he played there — solo, the long walk to the stage, hearing his footsteps echoing in the pin-drop auditorium, looking up in the darkness and seeing the exit signs glowing way up on the upper balcony… That was the only real clue as to the size of the room until the lights went up at the end and we saw everyone as we left the stage. Such a feeling! I high-fived the overhang at the stage door as I walked off 🙂

The night before we played at St George’s in the beautiful city of Bristol. I went for a little walk around in the morning when we arrived. I love the Georgian architecture and sense of public space. It also makes me a bit sad in that way that beautiful things can.

The church of St George was begun in 1821 to a design by Robert Smirke and is in the style of some of the churches I’m familiar with in Dublin, St Ann’s and St Stephen’s (‘the pepper canister’). It is now a really lovely concert venue, like The Queen’s Hall in Edinburgh. One of the bar staff, Dorian Childs-Prophet, was improvising on the Steinway grand piano (*sigh*) at the end of the night when everything was packed up. I stood listening to him for a while and then, buoyed with confidence after playing our show, sang a minor-bluesy version of Gershwin’s ‘Our Love Is Here To Stay’ with him. I was so elated I left my umbrella at the venue (slightly gutted about that — it was a really good umbrella). There’s a quote by the composer Leoš Janáček in the grounds of the church, inscribed in Caithness stone by poet-sculptor Ian Hamilton-Finlay:

On the paths I’d plant oaks that would endure for centuries, and into their trunks I’d carve the words I shouted in the air.

It’s taken from Janáček’s ‘Letters to Kamila’. I conveniently found a copy at the bookshop at the end of the street for £2 — a nice souvenir of the visit.

We started the tour the night before that in the stunning setting of Manchester cathedral. Its beautiful stained glass and awe-inspiring architecture (and splendid brand-new floor!) made for a remarkable first gig of this European tour. Looking forward to the rest! 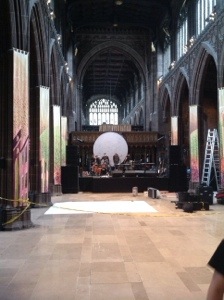