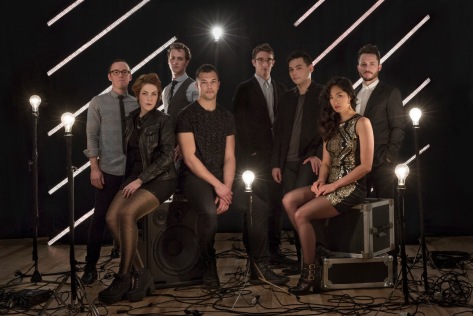 My friend Andrew sent me a link to ‘Sonsick’ last year while I was in the U.S. on tour. I remember listening to it backstage at the venue we played in Mill Valley, CA — playing it loud through the JBL desktop speaker as we celebrated after the gig. I’ve listened to it many, many times since then — it’s one of my top five songs of last year. (My research led me to discover Lucius, whose lead singers Holly and Jess sing on San Fermin’s first album.) I missed them the last time they were in Dublin, so I was determined to catch them this time.

After a short instrumental track that played as the band walked onstage, they started with the first three songs on their newly released second album, ‘Jackrabbit’:

THE WOODS
Allen Tate’s voice softly sets the scene in this disquieting tale of a boy and a girl and the dark and the deep. The instrumentation gradually grows in menace and Tate sings the last verse an octave higher, the change in tessitura bringing out a more impassioned timbre in his voice. The song culminates in a snarl from the most unusual instrument in the ensemble, the baritone sax.

LADIES MARY
This short song introduces Charlene Kaye’s voice, weaving one of the many great melodies that we’ll hear tonight. The band’s composer, Ellis Ludwig-Leone, stationed at the side of the stage, plays the bass line on a Moog synthesizer.

EMILY
The crowd relaxes into this song’s backbeat and we travel further ‘down the rabbit hole’ to the sound of John Brandon’s trumpet. This is a cracker and will grace many a festival stage this summer, I hope.

From here, we hark back to a song from the first album:

I’m listening to the album version as I write this. It’s cool to hear the various musical themes from the album appearing in the long instrumental section. Such a rich and rewarding work. Charlene Kaye and violinist/vocalist Rebekah Durham harmonise beautifully, Durham also employing a really great tremolo effect that caught my attention. Ludwig-Leone acknowledges Kaye’s great performance (the songs from the first album are seriously difficult to sing!) and comments that it’s a year since her first show with the group.

Back onto the Jackrabbit playlist now with these next two songs. Astronaut is one that I was curious to hear live, as it features a virtuoso soprano line at the end that emerges and floats away from the other instruments. Wisely, they’ve elected to put that line on violin for the live shows — it just isn’t a practical thing to try and do live in a sweaty club. You should definitely take a listen to it on the album, though. Beautiful singing. The acoustic guitar part on this song is also really lovely.

This must be great fun to sing — a strong lyric that Kaye *owns*.

Two from the first album now, Methuselah giving the enthusiastic Dublin crowd a chance to sing along with its infectious, breezy chorus. Again, Tate’s emphatic higher range is used to great effect in the last round.

Chamber math rock — again, this must be class to play, because it’s certainly class to watch!

…when you go to sleep don’t close your eyes…

Another brilliant vocal from Tate in this rocking tune from Jackrabbit.

Kaye leads off in this, a warped bluegrass duet with a choral cadence in the middle that leads onto some more awesome sounds from the baritone sax and the kind of dense ensemble work that makes San Fermin such a brilliant band to experience.

My favourite! (And, at close to 4 million streams on Spotify, beloved by many others it seems.)

I noticed the lovely celeste sound on this song (that, on listening back, I can hear a lot on the first album, too). Ludwig-Leone uses a Nord Electro — I wonder if it’s the sampled instrument from that?

Charlene rocks out on Telecaster for this…

These three complete the Jackrabbit run through, but for the title track which is kept until last.

I asked Ellis to sign the vinyl record I bought afterwards and, when I complimented him on the artwork, he said an artist friend had done both album covers. He mentioned wanting to relate the Jackrabbit image to the first album’s menacing bull, but to hint at something unnerving, too. Listening to the track now, it strikes me that this effect is achieved in the music, too. The song is at once a joyous expression and a reflection on life’s brevity and humanity’s cyclical existence. This idea could be extrapolated to a sorry conclusion, but Ludwig-Leone’s music and his band’s wonderful performing leaves us with a fiercely life-affirming message:

…better run for the hills…

DAEDALUS (WHAT WE HAVE)

This tune, which permeates the first album, is coupled with a lyric that muses poignantly on mortality and remembrance (“…when it’s going quickly and it’s like we’re half asleep…”). It begins whimsically and gradually squeezes shut its eyes and clenches its fists and crys out to seek some catharsis. Beautiful work.

This pretty faithful cover of the Weezer song acts as an antidote to the intensity of the last. Brilliant gig 🙂