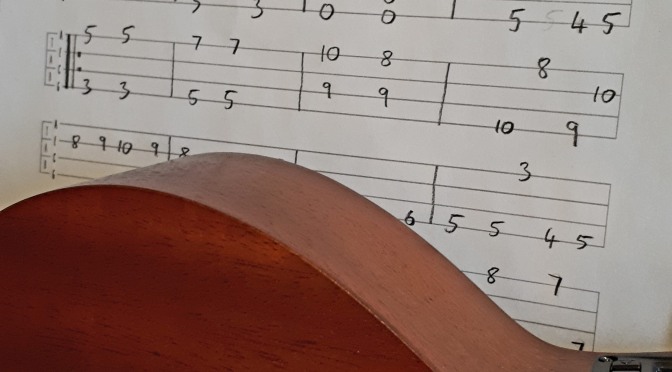 I used to play clarinet in a marching band when I was growing up in Northern Ireland. We’d have these ring-bound books that clipped onto our instruments using special attachments so we could play while marching along. We played a lot of tunes by the great American composer John Philip Sousa (Monty Python fans will be familiar with ‘The Liberty Bell’, which was used as the signature music to the cult British sketch show).

Jen and I saw ‘The Post’ last week, so maybe that’s why this particular tune jumped out at me when I was idly searching for a tune to work on. The film stars Meryl Streep and Tom Hanks and retells the proud history of the newspaper’s stand against Nixon’s administration.

Sousa was asked to write a march in 1889 for The Washington Post’s essay contest awards ceremony (read all about it in this article by Post writer John Kelly) and he came up with this piece, which apparently was great for dancing the two-step.

I hope you enjoy my ukulele arrangement! It uses a style of playing called campanella that has been a bit of a revelation to me in my approach to the instrument. If you want to find out more, seek out Jonathan Lewis’s YouTube channel and his website jons-ukulele.com.

Being snowed in these past few days, thanks to Storm Emma, has meant I got it finished. Check out my video — the tabs are here, too, if you’re interested.